ReadyForDisorder as a ‘family party with 650 guests’: interview with ReOrder

It is a sunny and warm Monday in Prague, ReOrder’s usual visit to Starbucks in some ‘hipster’ part of the city, only for this time – short interview before going back to his usual work.

So, first of all, how is your impression about Saturday (8th April 2017)? How was it in the beginning, in the end?

Overall I would say it was absolutely amazing. It was a stunning night, we learned a lot. We started at 4 p.m., preparing everything. Already it was like 8:30, and we all reviewed that we were in trouble with many things, like, GoPro cameras were not working, the sound was not working, and one player was playing around. There are so many things you are not prepared for, because you just can’t know. So we learned only this way, like, what to fix, what to do, and in the end it all went pretty well, everybody was happy and, I think, I was the happiest guy in the room, ‘cause it was 6 a.m. when I could finally finish the whole thing and say – “Ok, we did a great job”. I met with about 100-200 people, and they all said the same – “Thank you very much for this event, we really needed this”. When you hear something like that, it changes the purpose, it changes the perspective.

You also probably saw that there were people from not just Slovakia, but also Ukraine, and Poland…

Yes, I saw the Ukrainian flag, Polish flag; there were people from Germany, almost the whole German TranceFamily, people from UK. There was a guy from UK who was celebrating his 50th Birthday. It’s absolutely incredible to see all these people from different countries, we didn’t expect it, as it was supposed to be a local event, and – it’s growing. It’s very nice to see that people really enjoy a good party, even if it still is a small size. 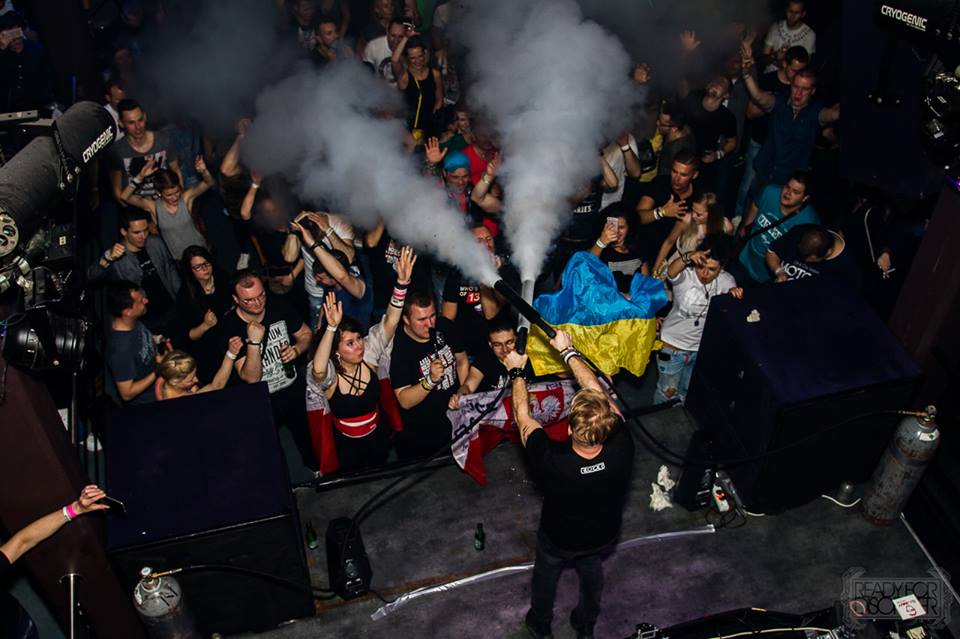 What was the most difficult about being a host?

The most difficult was, actually, to do it all, as it’s professional. We started this in December, all the preparations, and it was just constant work– you need to have everything absolutely to the point, so it doesn’t crash down, so… we did it, we prepared ourselves for every situation, anything that could happen, and everything was so fast. So, the only difficult part would be, probably, the ‘people factor’, you know.

And what was the most difficult part?

The promotion itself. When I did events before, they were smaller; they were not like this size. So, this time, we needed to get the flight tickets, to get the hotels, we even needed to get small cups for the welcome drink, you know, the glasses for champagne. So many things that you need to do, it really helps to organize your life as well, ‘cause you find a system how to make things faster. So, that was a difficult part, to figure out what’s the way how to promote the event, ‘cause before it was just a friendly thing, entry was for free, every DJ played for free – this time it was different. We needed to do it so it looked good and everybody was happy. So that was our goal – make people happy, so they enjoy the party, and I think – we succeeded, so all the hard work we put into it, all those months, came out really nice.

How many people do you have in your team especially for this event?

We had 6 people. My girlfriend, Šarka a.k.a. Miss ReOrder, we had Janka from Slovakia, she’s organizing Ear-Gasmic event in Bratislava, and we had Luigi, who was our errand-boy, the driver. He was perfect, even managed to play his set in a really good style. Then we had Lukas, who is also my PR manager, he was helping us with the PR and the FB pages. And we had Tom, he was doing all the graphics. He was working so hard, even during Christmas.

But the best part is that you split the tasks.

Yes, everybody had their job, and we worked with trust. If I tell someone from my team that this needs to be done, the person that will take it – I know that this person will do it, so I don’t need to ask twice. So I think that was the most important thing about doing this event; that we trust each other, that we know that everything will be done.

But still – does it feel good now, when it’s over, or you can’t wait for next event?

It feels amazing! Suddenly I have so much free time that I don’t know what to do (smiles). It’s most likely that I will just start working on my album finally, ‘cause I had to stop with it the past months, preparing for the event. And now – back to music.

You probably played a lot of new tracks; I am not sure, because I skipped some parts…

I can’t remember (laughs), but I played my new remix on Gareth Emery’s ‘Concrete Angel’. It will be coming out in May, I did the testing now, because it was fresh new-finished, I don’t know how it will sound. In the club we had ‘Funktion One sound,’ which it is really clean sound, why not test it there and see how it sounds in the live dance floor. And people loved it, I was really impressed.

Why not? It’s such a legendary track.

Yeah, but you know how it’s with legendary tracks – you do it, and if you do it wrong, people will hate you. Luckily, people were chanting, so it was good.

If you plan to continue, do you want to keep it only in Prague or do you still want to go to other countries?

ReadyForDisorder is mainly a tour, so we would like to stick with it. If somebody would like to do the event in their country, we will help them to do it, help to promote it, but ReadyForDisorder in Prague will be just one time per year, and it will always be in April. We want to do it bigger next time, but, after seeing what happened on this weekend, the intimate thing, up to 1000 people – it’s absolutely perfect. The energy, and the crowd – it’s unforgettable, so we will keep it this way. I think that Prague needed something like this, that’s what the people said.

Another question: for me it seemed like this was all about friendship, all the DJs and organizers – is it true?

Exactly. It was like a family party with 650 guests, ‘cause you know – Sied van Riel is my good friend, Jordan Suckley is my good friend, same with Ferry Tayle, who, unfortunately, couldn’t come and I was really sad, because he is very sick right now, and I hope he will get better. OverDoz the same, it’s like giving a chance to someone from a different country to play at the event, even though, it’s not a big name, but I know him in person, and he is a good DJ, so why not bringing him? How many times in life these people, who are just doing it like a hobby, you know, and they play maybe one event every month somewhere in their town – why not giving them a chance to show their skills? And I was really happy to see, for example OverDoz, he had a full ‘sit-down’. There were still about 200 people at 5:30 in the morning, and they all sat down for one of the tracks he was playing, and his mix was flawless, it was really nice.

At the same time, did something surprise you during that day or everything was as you expected, or anything you can remember was like ‘wow’?

What surprised me was that it was 10:30 p.m. and the club was already full. Most of the people came really early and – they stayed. This doesn’t happen on every event. Usually people come around midnight, for the warm-up and they start to dance around 1, and now already at 1 a.m., when I started to play my mix, the club was absolutely packed. That was really surprising. It was also nice to see people with all those flags, it felt like a small festival in the club.

What about all new unreleased tracks? I know that there is a collaboration with Driftmoon still unreleased, so – when can we expect more news about it all?

There is a lot coming right now, especially from  me. As I said, I had this new remix from Gareth Emery coming in, and also a new remix from Marlo, collaborations with Driftmoon, Talla 2XLC,  RAM…. There are many many tracks coming out, and also my album, which I am working with a lot of great vocalists and artists. Can’t reveal much yet, it’s all a secret, but it will be released around September-October.

Do you want to add something more?

I would like to thank everyone who came on Saturday to Prague for ReadyForDisorder, and thank you very much for having a good time and for all the positive feedback. There was no negative feedback, thank you so much! All the mistakes we did – next time we’ll fix it, and I’m just happy that I didn’t see anything bad happening, and you all just enjoyed the party. Again – thank you very much for coming, and, if you are listening (reading), thanks for supporting all the Trance artists around the world by your presence at the gigs. Thank you!

I am always Ready For Disorder!