Last Saturday was a significant day for the Trance Family not just in Latvia, but also from the neighboring countries – Lithuania, Estonia and Belarus, as one of the most popular Trance vocalists Emma Hewitt was invited to perform at one of the best clubs in Riga – Coyote Fly. Even if for them it was a usual way to attract more new people, for some it turned into a dream coming true: meeting and listening to this angelic vocalist in person, even if it means travelling more than four hours for just a few hours of Trance music.

As the event was announced on February 1st, it gave a rush of happiness and hope to Trance fans, but also at the same time, lots of questions. As Trance is not popular in Latvia, it’s been years since any of Trance related artists were invited to play in Riga (except Christian Burns, who also performs with other genres), so seeing someone coming here was not just a surprise, but also a miracle for local Trance Family. Facebook went “Boom!” because of that, so of course everyone wanted to know more.

“We wanted to attract the 30+ audience, as Emma performs many songs which are being associated with good parties at their age. Her vocals are encoded to many ravers, which have been relaxing in the big hall of (legendary) Essential Club till the morning.” – That was the reason why club’s management decided to invite Emma.  And even if not all ravers from that time could join the event, there were many others who couldn’t miss it.

Must admit that after all, scepticism was still there. Coyote Fly is known for a different genres of music, not Trance, so you could expect that regular visitors won’t understand Trance, at the same time you could expect big enough amount of Trance lovers who would  keep the atmosphere and mood of ‘Trancy’ night. Some people were doing everything to come to the event, and at the same time, as usual, some others had different reasons not to come – work, family etc., but in the end it still turned into successful event with satisfied crowd and Trance fans, and happy artist.

The event took place on March 17, but Emma Hewitt had arrived in Riga the day before, after flying from Australia for over 30 hours, which is never easy. While she used the day to see the beauty of Riga, capital of Latvia, Trance fans from Baltic countries and Belarus had gathered together for a common trip and dinner, united by the love to this special genre of music.

Even if the club was open from 23:00, most of the people were still coming after midnight, and Trance music started to play only after 00:30, when local Progressive and Trance duo Blood Groove & Kikis took their place by the decks from club’s resident DJ. They brought the new vibe, starting the set with Alpha 9 remix of “Dreamer” by Axwell /\ Ingrosso and keeping this progressive sound for a while. Due to technical problems music was stopped for few moments (even if all was perfect during sound check), so the set couldn’t be enjoyed at its fullest, but local fans know that these guys can play amazing sets. When the problem couldn’t be solved anymore, resident DJ took their place to skip last minutes before Emma’s performance, who was quickly and unnoticeably brought to the club some time before, guarded by local guide.

As soon as Emma got closer to the stage, she was quickly surrounded by fans, who noticed her first and got the chance to take pictures, but as the time of performance was getting close, she also needed some time to get ready. And then the musical journey could begin! 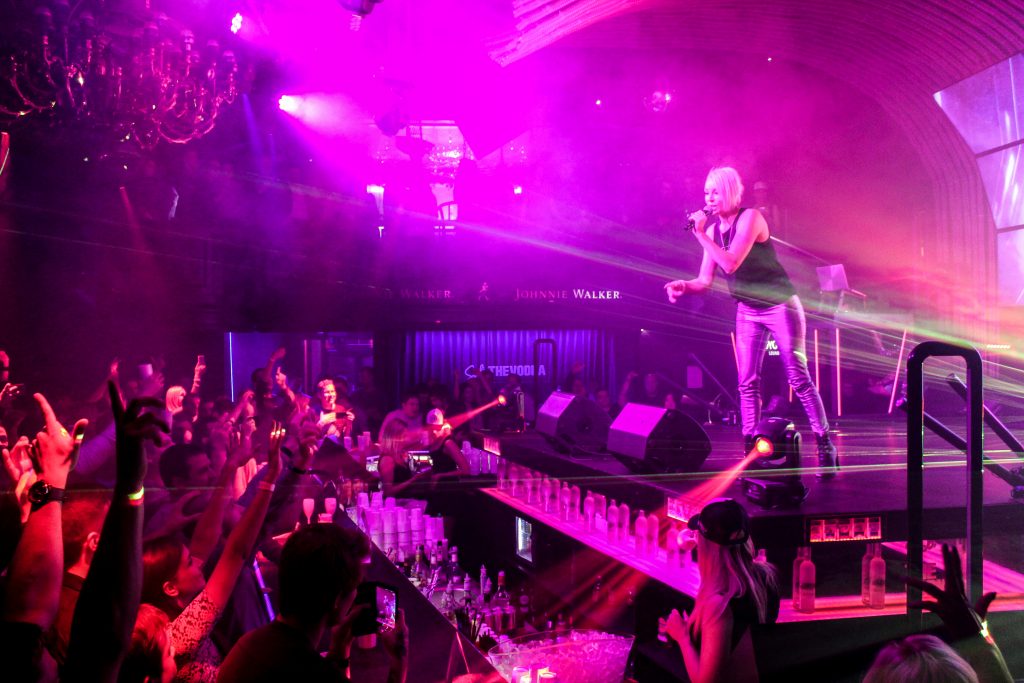 Even if Emma’s performance was only about 45 minutes long, it was enough to sing not just her classic tracks as “Waiting”, “Be Your Sound”, “Colors” or more new tracks as “My Reflection”, “Restless Hearts” and “Tonight“, but also some other random tracks, for example, “Sun & Moon” from Above & Beyond and Richard Bedford,  “Imagine” from John Lennon or “A Sky Full Of Stars” from Coldplay, making some improvised mash-ups of all together. Front rows were never afraid of singing by, which meant that there’s enough of people who really came there because of Emma, who also knows how to communicate with the crowd, even if some things go wrong, including troubles with the sound -again…-, almost everyone got a chance to hear his/her favorite song live, appreciating her elegance and charisma. It was sad that this performance couldn’t last forever. 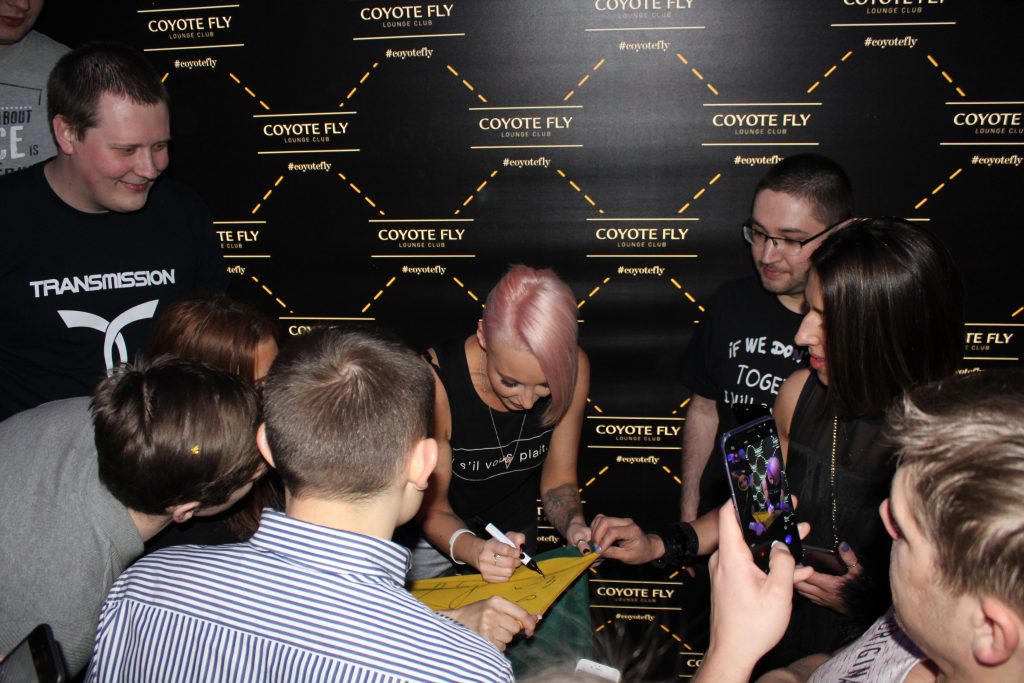 Huge thanks to the club and Emma Hewitt for organizing Meet & Greet after everything – things like that really mean a lot to the fans, as some really have been dreaming about this for a looong time. After signing some flags, Emma spent quite a time taking pictures with everyone who wanted, finding out that there were people also from Poland and Switzerland (maybe even from other countries?). Not every artist is so friendly and easy-going, but these are the things which should be always appreciated.

Can’t skip the part that most of the public started to leave after Emma’s performance, which means that many came not just to party randomly, but to see and listen to her. 30-50 minutes later dance floor looked much emptier, as the music has changed to the usual style of the club. After short interview with the star I understood that Emma didn’t even think that she was one of the first Trance artists in years and that this genre is not popular in Latvia – crowd was perfect, responding, not any worse than in other countries where she has been previously. What can be better than the event were both crowd and artist are satisfied?

This is probably the most intriguing question at the moment. Club’s management doesn’t regret organizing this, as they admit that Emma’s vocal is truly Nr.1 and the event itself turned out to be very ‘hearty’, what they didn’t expect (also when about 500 people came). They would like to see and hear Emma Hewitt one more time, and probably already next year (which would be awesome!), and at the same time they will consider some options of inviting also some Trance DJs, so local Trance Families can only hope for the best. And even if there will be some positive decision, we need to support as much as we can, because it all depends on how many people will come. But now, all we can do is wait!

Anyway, again – huge ‘’Thanks’’ to Coyote Fly and Emma Hewitt for this experience!