When such a huge star of Vocal Trance music is coming to your city, you can’t miss a chance to take an interview, so even if it took over 30 hours for Emma Hewitt to come to Europe from Australia, she still agreed to have one, revealing some news and interesting facts about her past and future projects, how difficult it can be to find a producer for solo songs, who usually pay – producers or vocalists, and more facts, which you can read below!

So, how do you feel in Latvia? It’s cold, but otherwise? 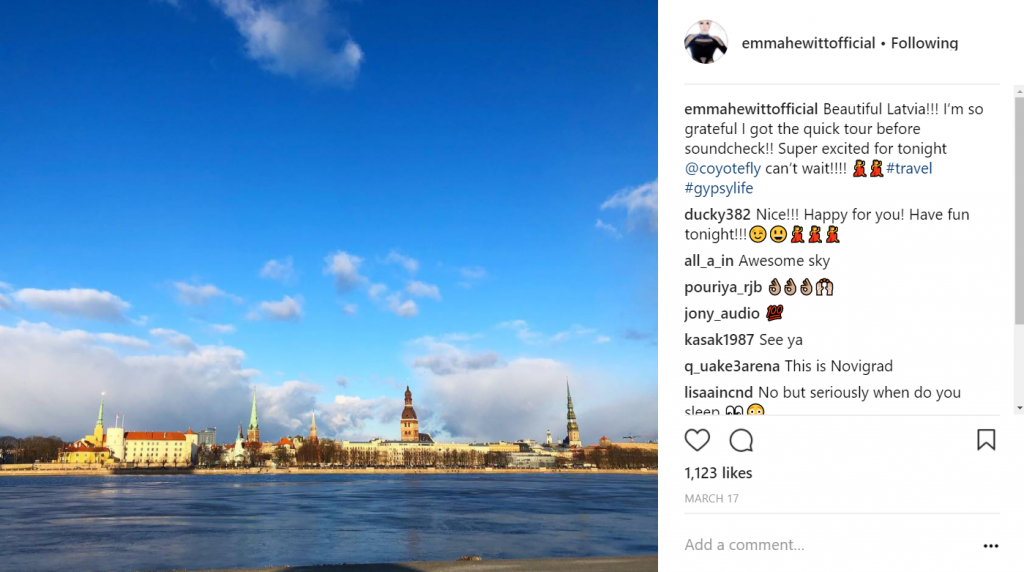 Emma enjoying Riga before the event

“I like it! The cold is beautiful, because I came from 36 °C in Australia, so I was getting bored of the heat. It’s nice, for change. I couldn’t do the whole winter, I think, but for few days it’s pretty beautiful. It’s so nice here too, so pretty.”

But have you been in Baltics before, like, Latvia, Lithuania, Estonia?

“I’ve been to Estonia just to film the video, in summertime. It was nice there too. It reminds me of Tallinn here, like, the architecture and everything is similar – it’s beautiful. I wish I had longer here, to look around more. People are nice too, everyone is very friendly. But tomorrow I’m leaving, as I need to go to Miami for the Music Week.”

What do you think about the crowd here, in the club?

“Really really nice. I really liked the vibe, people are so cool, but I didn’t expect, when I walked onto the bar, one person grabbing my leg and another guy starting to fight with him… “Oh, I’m sorry, security?” But people here are cool, super into the music, which was really nice.”

What have you heard about the situation with Trance music in Latvia?

“I don’t know a lot, I’ve heard it’s a little bit more ‘underground’, but it’s more, like, Trance Family and the people that are into the music, it’s not like Top 40.”

Did you know that you are basically the first Trance music related artist performing in Latvia since like 2011? [Not counting few artists which perform also with other genres, not just Trance]

Well, we had like some big names like Ferry Corsten, Paul van Dyk coming to Tallinn, but nothing has happened in Riga, so that’s why we were skeptical about event with you, if people will come or not, how much do they know your songs etc. Thanks to social media some people came even from Lithuania, Estonia, Belarus…

“Yes, that’s very nice! A few people were saying that they were from Switzerland, England…”

For us it’s very unusual as we don’t really have events like this, so we hope that your coming to Latvia will change something.

“Thank you for info! It’s very special, and I’m so glad to be here.”

So you didn’t feel that it was the ‘wrong’ crowd – was it similar as in other countries?

“Yes, definitely it felt like everybody had a good vibe, it was a nice crowd, I just wanted to get closer to everybody, but because of the bar it wasn’t easy, that’s why I kept running down and that’s why I fell down the stairs a little bit (Oops! #laugh).”

How did you come up with the idea of doing mash-ups while singing one song and then randomly starting another one, something different?

“I just get bored of my own songs (#laugh). I realize it’s nice to just put some other people’s songs over the top. If I recognize that my songs have same chords as another song, I’ll just put in whatever I feel like, cause there’s a lot of instrumental breaks in Trance songs, so it’s nice to sometime put the entire chorus of another song over instrumental part. It’s interesting for me.”

But how do these song come out in your head? Randomly, or specially this one, or that one…

“Sometimes I know the Trance work and I do, like “Sun & Moon” [I wish I wrote that song #laugh] works over “Disarm Yourself”, so I love to sing that, but other ones I would just grab randomly, if I feel like singing something at that time, or sometimes I just sing things that are not real songs.”

Maybe you should try making a duo with Richard Bedford?

It’s been heard that you have some ID with Markus Schulz coming soon, which he has been playing during his last sets?

“Yes, yes, we just filmed the video, it’s coming out soon [updated: was premiered on March 29]. And I even haven’t heard the whole song yet either, ‘cause we made the video, and he just put like a demo, and I think, the song he was playing – he was just testing out, as he didn’t have it finished yet, so I still haven’t heard the final version. And the video is made with the demo over, but I hope it sounds good.”

Last year you also worked with Aly & Fila, for “You & I”, which is something different?

“Yes, they’ve just done… it was really different, the orchestral version. They’ve just done dance mix, I think they also started premiering it this week too, so every time I’m like “I wrote that song 3 years ago and gave it to them, and now they’re going to release it same time as Markus Schulz?” 3 years and same time now. #giggle”

Waiting for the sequel!

It’s been 6 years since your “Burn The Sky Down” album – do you have any news about the new one?

“Oh, I’m trying to make one now. I’ve been spending so long trying to make another one, but it’s really hard to find a producer that makes it in a sound that I want it to be, because I can’t produce myself. I write songs and everything, but then, each time I go to producers and pay them to do the music – it comes out wrong eventually. I’m spending my money on people and then it just sounds so bad like… start again. So now I’m working on an album with one producer [to stay secret for now], who really gets the sound, so I’m gonna do something like “Burn The Sky Down”, but this production will be a bit cleaner, I think. “Burn The Sky Down” was a little bit messy, the production.”

When you mentioned that You pay producers to make the music – isn’t it usually opposite, that producers pay for vocals?

“Well, it depends. If you are doing a collab, a lot of the vocalists get paid by producers to do their tracks (which don’t have that big value to vocalists as their personal songs), but it’s different when you are making the solo song and getting somebody produce it… It doesn’t work both ways unfortunately, so when I want somebody to produce a solo song, I have to pay a producer too, otherwise I have to give it as a collaboration. To make my own album has always been really hard, because it’s really difficult to get somebody on board that’s relying to do something that they don’t have as a collab. It’s definitely fair enough because if they don’t release it as own track on their label, there’s nothing in it for them. I’m happy to pay people as long as they get it right.”

Maybe some stupid question – do you like to sing high notes or deeper and lower ones?

“Oh, gosh! In the studio I really like to sing high notes, I really like to dip the deeper stuff too, but now, since I sing few songs too high, every time when I write something for DJ and send it to him, when a chorus wasn’t so high… every time the DJ was like “We need the high note in the chorus!”, so in every song I need a high note, really? So sometimes for live [performances], I’m like “Why did I do this myself?”, because when you are in the loud crowd like tonight, you start getting a rusty voice. Then the deep stuff is ok, but the high stuff is very concerning. So, yeah, I don’t know why I wrote all the songs so high, but they won’t let me out of it now. (#laugh)”

Huge thanks to Emma for interview and Coyote Fly for bringing her to Riga!