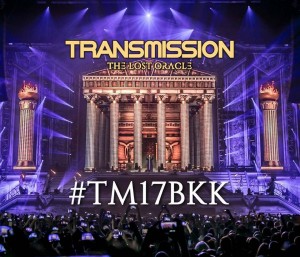 For the first time that Transmission brought its production to Asia and I have to say it was a huge success. Many fans from more than 60 countries came to Bangkok and had an unforgettable experience. It’s been 2 weeks since it happened and I’m still having post-depression, not really knowing when I’m going to get over it! Well…?!

Organized to live up to the name of TRANSMISSION.

Fast-forward to this day – 10 March 2017 –, a day we all Trance Lovers in Asia had been waiting for. Months of an excruciating expectation and finally Transmission Asia Festival‘s day arrived. Bangkok proved to be a great choice: relatively easy and affordable to reach from countries in the region and with also affordable accommodations. Around 10,000 trance enthusiasts from Asia and beyond travelled to Bangkok to be part of this experience. And as far as I was abe to asked, not a single one of them had any regrets.

The venue, BITEC, was very appropriate to host such a big event, easy to access and equipped with nice facilities. In addition to that, the system with rechargeable payment wristband worked very well with people in order getting their drinks and other goodies. Entering the main hall, the chill areas were located on the sides ( including drinks bars, top-up booths & toilets ). There was a special good access to VIP & VVIP areas too. Definitely thumb ups for these! It was a huge venue that was able to accomodate more than 10,000 people easily. All in all, the venue was well organized and showed that there was an effective and successful planning behind. 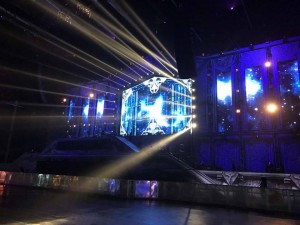 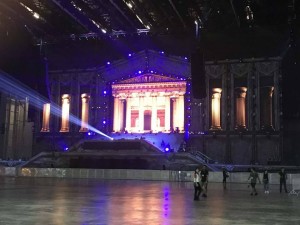 I would personally point a few aspects where the organisers could further improve what was already an excellent event:

* Improvement of the sound and light system at the back of the venue as this was where the VIP/VVIP area was located.

* Lowering the DJ-booth so that the front row fans can see the DJs ( and vice versa ) for a better interaction with the DJs and the crowd. Just MY fan opinion though!

* Place ( more? ) garbage bins in the venue to dispose of cans, bottles and buckets.

* And last but not least, stocking up large numbers of Transmission merchandise as it was sold out completely after 1 hour and most likely people were left without. Luckily I had mine before  door’s opened and without having to queue for. I’m sorry for those who didn’t managed getting it and a lot of fans will envy me. Oops, sorry guys!

Behind the music show, the gigantic stage was set up like a temple look alike. The Lost Oracle and was also presented by Kim Kiona. I was so fortunate to meet her in person. She just had such a special aura.

I don’t want to forget mentioning Create Intelligence & Thai crews for building up that gigantic stage. I wish I would be able to elaborate more ( trying my best to write however I’m not a writer.. Lol! ) but I took some pictures of it. Hopefully those pictures will speak louder than my words. They show just a bit how awesome the stage was! 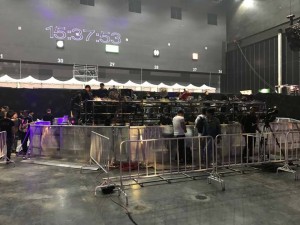 The show was absolutely spectacular. Transmission is famous for its lasers, lightings, pyrotechnic show.. and indeed, it didn’t disappoint us. Thumbs up ( again )!

The sound system, also shipped in from Europe, was very professional and had a great quality (especially those in GA stands). The line-up was absolutely world class and all the DJs were having a great time. They definitely disappoint with the first ever Transmission in Asia and of course, the crowds were cheering throughout and all along. All of them played fantastic sets and it was clear that every DJs enjoyed this festival as much as the crowds.

After a very well played warm up set by local hero Lonskii. Driftmoon put the bar high for the rest of the night with a banging set that got everybody in the right mood. He was later followed by Omnia, Bryan Kearney, John O’Callaghan, Transmix set (by Vision Impossible – amazing lasers show), Aly & Fila, Ferry Corsten and Markus Schulz. Markus  even played an extra half hour at the end, for the delight of all the fans who danced their feet off from 6 pm until 2:30 am.

The atmosphere was ecstatic and once again it showed the great spirit of the international trance family; a happy bunch of music lovers that never cause any problems and just want to have a good time. The same applies for the DJs, who gave their best and who took a generous time after their sets to engaged personally with the fans and to enjoy the work of their colleagues. This great friendly spirit between the artists and fans is what it makes the international trance community so UNIQUE.

Although in the days before the event there were some complaints about the timetable, with some of the more uplifting sets planned in the second part of the show, nobody spoke anymore about it after the event. Not many people are aware of the difficulties of putting together a good timetable with so many aspects to take into account ( travel schedules, personal wishes, etc ). I think we can conclude that the organization worked this challenge out very well.

If you ask me which sets were the best? All I can say is that every DJ played a magnificent set. Many IDs were played. I personally think there were world-class sets because the tracks played were not the usual stuff that always gets played. Then again I’m not a DJ so wouldn’t know in which degree but as a fan, they were all damn good sets. The highlight for me was seeing Fadi playing Sogno: Alessandra Roncone joined Fadi at the DJ console while her track was been played and this became a great moment of joy for her and the fans.

The atmosphere was just incredible!

I believed that is something to be admired. Since it is a sound-light production, that does not leave much room for changes or surprises. Everything is precisely scheduled and planned. In any case: what a vibe and what a total eargasm! 😉 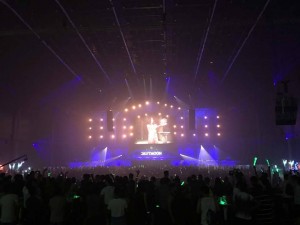 Wanna take this opportunity to THANK & CONGRATULATE Mr. Srangkun Sirisinha for bringing one of the best indoor trance festival events to Asia. A success that will be envied by many other promoters in Asia. Without his perseverance, we wouldn’t have enjoyed such a big event in this part of the world.

Also wanna THANK Create Intelligence & Thai crews for helping creating and building the stage from ground up. You all deserved a special shout-out! 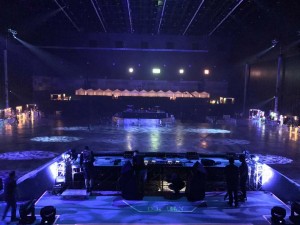 I was supposed to be just a raver on that day. Unexpectedly was invited by Transmission Project Manager, Mr. Martijn Van Den Berg to help them with some broadcastings. I felt lucky and honored to be invited. I naturally accepted the invitation without hesitations but I won’t go into further details.

I arrived there 2 hours before Transmission door’s open. Was greeted by Mr. Martijn and my eyes were wide open because he was looking like a colossus. I felt as I were Frodo looking at Gandalf the Wizard. Standing at 2 meters tall, I was a little intimidated but I can assure you there was nothing to fear after knowing him. All I can say is that he is a so down to earth type of person, enthusiastic and friendly. I felt immediately comfortable. He even made some time out his busy schedule to show me around the hall and the backstage. I had my first glimpse of what the Transmission set-ups and backstage is like. It was a real dream come true! I can’t express enough gratitude to this big guy. Also big congratulations to Martijn’s Transmission team for an absolutely amazing work done until the last minute!

Also not forgetting Vision Impossible as well, which is formed by Mr. Martijn Adema & his team. They were astonishing! Without them, I’m sure Transmission: The Lost Oracle wouldn’t have been so spectacular. It was a truly beautiful night. And as the saying goes… ‘Beauty is in the eye of the beholder’ which means beauty doesn’t exist on its own but is created and perceived by observers. Great RESPECT for these guys!

Also DJs performed at Transmission After Party.. John Buhd, Snaz, Alessandra Roncone, Darren Porter & Steve Allen, they all played brilliant set as well. My excuses for being unable to write more as I’m already run out of words ( pulling my hair! PMSL ), but a big THANK YOU TO ALL!

I have been to many trance events in Asia and I have to say that Transmission is something unique. The crowd was very good, trance is becoming bigger and bigger in Asia and I think Asia deserves more trance events like this. Transmission will come back next year, probably again in Bangkok. I wished Transmission Asia Festival was next week though! An event that exceeded all my expectations and I can say TM17BKK is one of the best trance event that I had attended comparing to all the other trance events in Asia. What made it very special for me is that I met a lot of old and new friends which all given this incredible positive vibes. This is truly a memorable great trance event! I wish I was able to share my excitements and happiness to you through my own words and you were able to feel a little bit of this amazing event.

Once again THANK YOU.. Transmission Festival & to all Trance Families & Lovers!