Last weekend I was supposed to attend Married To The Rave (MTTR) festival in Orlando, with 3 different stages and one of them was the Trance stage. Some of my friends were going to be play there, so I decided to go and support them, even if the drive took me more than 6 hours. But before the day of event I didn’t know that it will turn into the most chaotical event I’ve ever experienced, even if the final result was not as bad.

A short intro to the event event: the Trance stage included quite a huge line-up for such small promoters. Neptune Project and Indecent Noise as headliners, Monoverse, Niko Zografos, Kristina Sky and some more coming from other parts of USA and elsewhere. That day was supposed to offer the listeners some 13 to 14 hours of Trance and Progressive… or at least that was the plan until bad news came out in the morning of the festival day.

When plans for big good party are almost destroyed

A few hours before the planned door opening time, organizers posted on Facebook (FB) that the original location wouldn’t be allowed to host the event due to lack of necessary permits, thus they will try to solve this problem as soon as possible, and also try to find a new location and reschedule the event. It was something unexpected for me and many others who saw this post, but I thought “ok, bad things happen”. But that was only the beginning, even if the FB post went viral right after, with some people asking for refunds and some others wondering if there was a point on travelling from other cities.

One of the best comments when situation was still unclear

Shortly after, I contacted my friends who were supposed to play there: Reliquary and Monoverse. Even if one of them found out about the bad news on FB, the other one had no idea about what was going on. And this is certainly the worst part: during the whole day not a single one of the artists received a call or message from the promoters, forcing them to look for news in FB. They could wait, they could get less time to play, but was it that difficult to call and to explain what had gone wrong? Seemed like the promoters didn’t think it was important, so the only thing we could do was to keep looking for news all together.

The waiting process was also not easy… We were looking for an alternative location for the Trance stage but not finding anything good so quickly while seeing a lot of different posts in internet, but at least me and my friends spent this time all together, as a family: Trance Family, with some good music on the background and sharing stories about how we got into this beautiful genre. Huge thanks to Unity Trance Family from Atlanta and Monoverse with Niko Zografos joining us, because this time spent together was awesome! 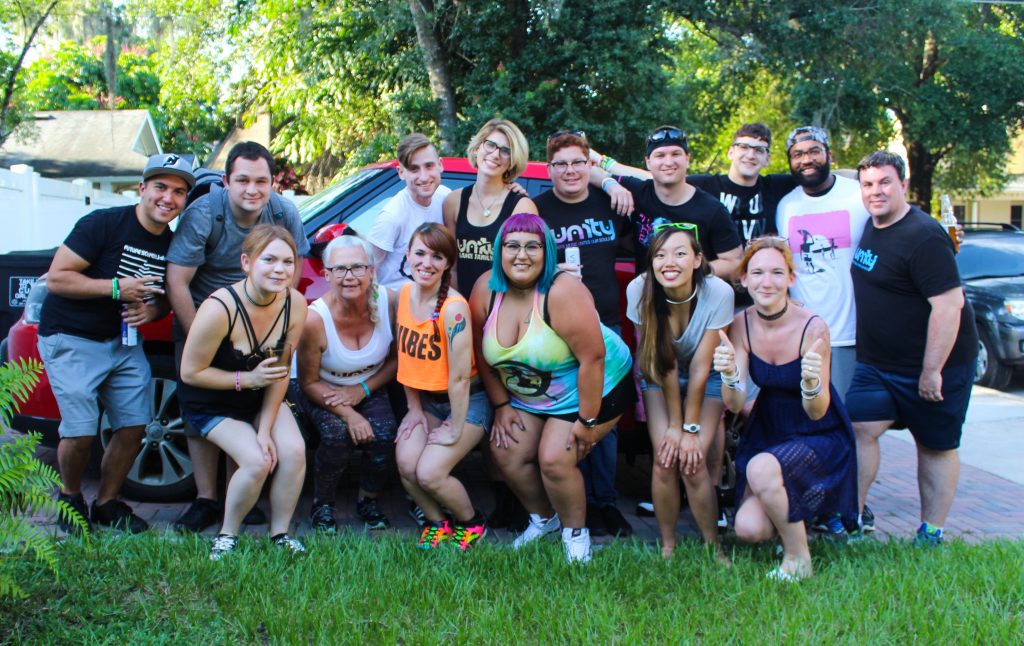 It’s all about Trance Family!

Even if the festival was supposed to start at 1 PM, we received some news about it taking place at another location only after 4 PM, and the new official starting time was now at 7.30 PM. It  was still better than nothing, as all artists were already there (or almost).

After all this stress, we were still excited to spend the rest of the evening and night raving, even if some artists had lost their chance to play due to lack of time left. And still – artists received no call from official promoters, just from others who took the responsibility to make everything happen.

Time passed by, and shortly after 7 PM we made it to the new location – a small bar in downtown Orlando. The DJ booth was small too, and we were happy to see some of the DJs, so somehow, on their own, guys started to get everything connected and working. All was good until we got to know that we are not allowed to use this equipment as it belongs to the bar, not the event, which meant – we needed to wait for everything to arrive, basically just sitting when all the fans were already outside and ready to party. But luckily the new organizers and equipment arrived quickly, so about 7.45 PM music was playing and Monoverse began with his set. 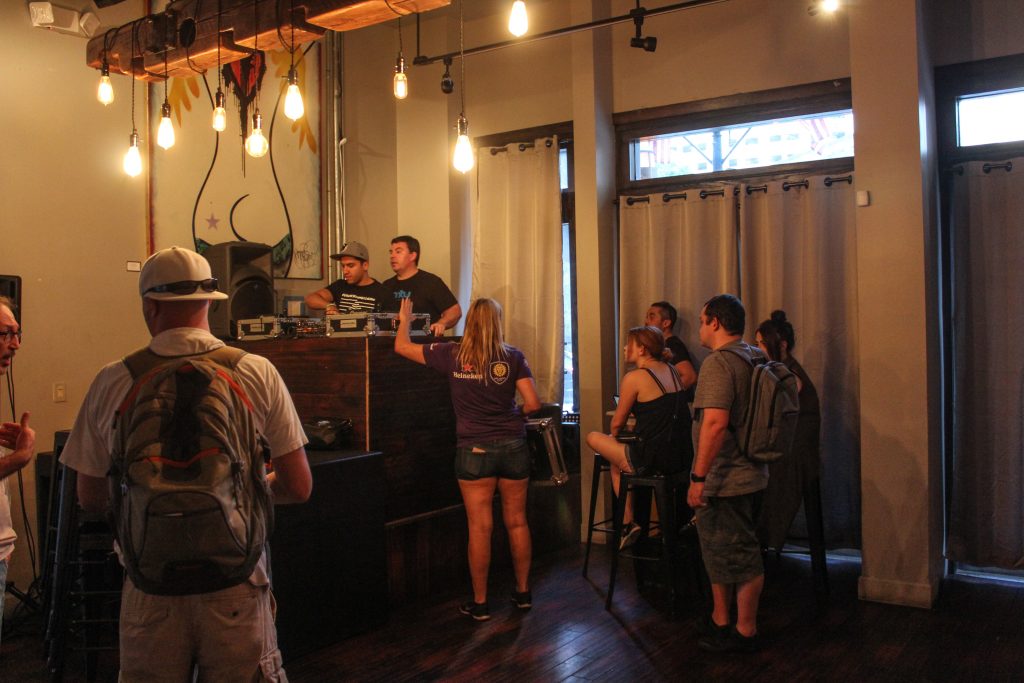 Trying to get the party started

Forget the worst with the music playing

Once the music started, most of the problems seemed to fade away. People were slowly coming in, but for sure not the amount which was supposed to come at first, as many gave up on everything, but not the real Trance fans. Monoverse started with progressive side of Trance, next after was Niko Zografos’ turn with a more uplifting sound, and then Magnus continued with an even harder shade of uplifting. The crowd was dancing, especially some muscled guys with just shorts on, showing their best moves, as well as some others spinning some lightful accessories, giving you the basic impression of American Raver-Crowd.

After Magnus’s set there was a change in the overall atmosphere, as Kristina Sky went back to melodical progressive sound with catching breaks. It was like a second breath for that evening, also because the time of headliners was getting close. You could see people coming in with Neptune Project T-Shirts, which meant that someone was really waiting for that set.

Even when Neptune Project is a duo of producers, only one of them (Dan) was there to play, wearing his headphones in funny way, concentrating and enjoying the music. His sound was different from the ones who were playing before, so no wonder that after the set many his fans approached him. But it was not the end yet as there were still one and a half hours left for Indecent Noise to play, especially as he came a long way from Poland. The set was also different, like going back in time thanks to bringing classics such as “Lethal Industry”, “Exploration Of Space”, a rework of “On A Good Day”… giving an overall old school sound to the listeners.

Even if the night was over at 2.30 AM, it took some more time to talk to everyone and say goodbye to friends. However, some of the DJs decided to continue the night out while I was heading back to my car. Usually I’m not so tired in the end of event, but because of all-day-long stress it was enough for me, knowing that I will need to drive a lot next day. 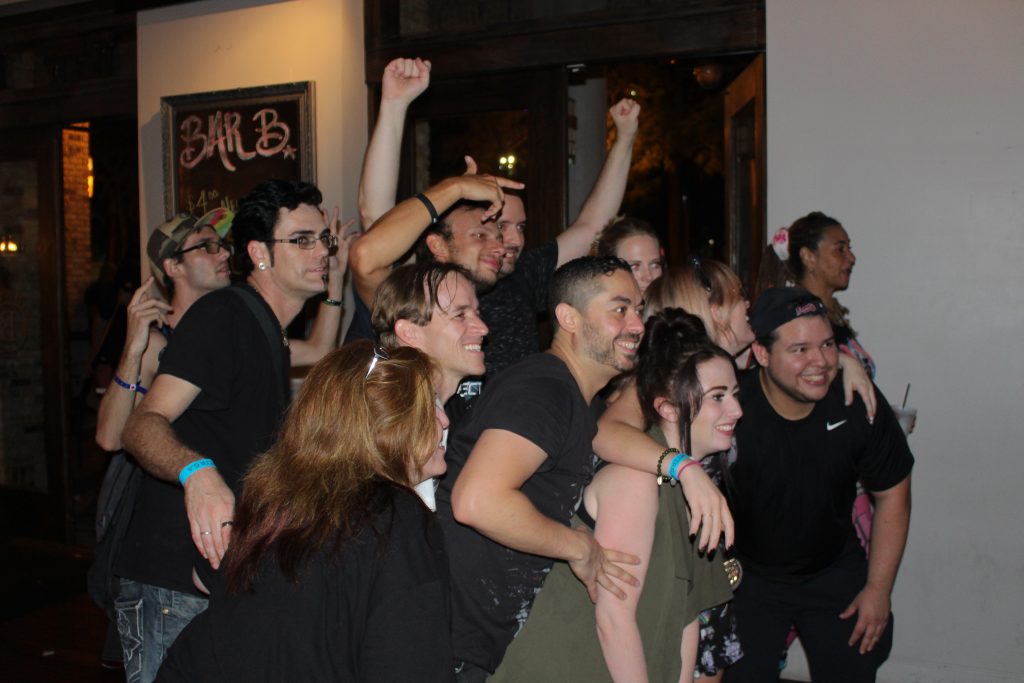 End of the party is not the end of the night!

Whose fault it was? 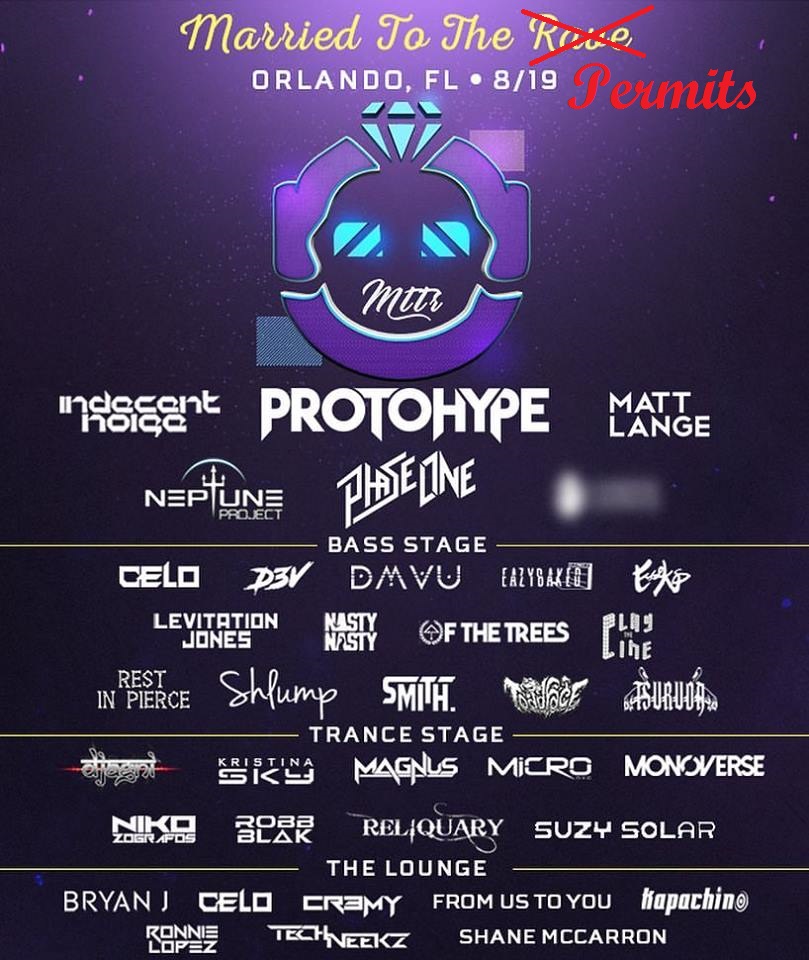 And it was supposed to be huge…

We will never know how this festival would have looked like if everything had gone well. What we do know is that three stages were set apart into three different locations (which didn’t have enough space for everyone), and many artists, if not even some headliners, lost their opportunity to play.

The real reason of such consequences is still unknown for most people. The official version is that the original event location didn’t have the proper documentation and permits to run this kind of events, but even if that was the case, wouldn’t it be responsibility of promoters to check it all in advance? At the same time, some were blaming the promoters for doing sound check early in the morning, which attracted policemen attention. But that also doesn’t justify them ignoring artist management, who had no idea about what was happening. And we’re not even talking about them forgetting to pick up one artist from the airport, who came a long way from Europe. Was it really so difficult to call the people affected and inform at least few of these things? It’s a huge failure for promoters, as they still need to pay artists and also do refunds for everyone who didn’t attend the event, but I wish them luck to get it done – let’s hope they will have a chance to fix their mistake with future events.

Gladly people still got a possibility to enjoy another music journey, even if it wasn’t in its best way. Huge thanks to Bobby Lyman and especially Sage Sappho for helping in finding location for Trance stage, and also for informing us and DJs about the situation. Respect for making it happen, just sad that it wasn’t done by the original promoters from the beginning.