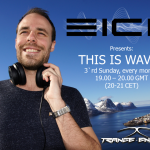 Eich – This is Waves

Eich – This is Waves